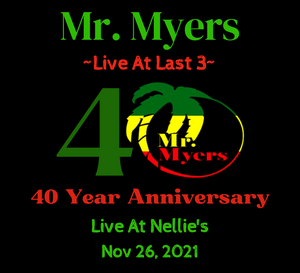 I'm excited to be playing their first Annual "Jamaica In January" Party- it's gonna be fun! Tropical Drink specials and a special menu, come on out!!

Find me on social media!

Hope to see you soon!

Todd Donnelly is a singer/songwriter that plays steel pans and percussion. He has been playing music since childhood, when he was fortunate to visit Florida and the Caribbean frequently. Todd developed a deep interest in Caribbean music, which led him to the Steel Band program at Northern Illinois University in Dekalb, IL. While there, he started the band Mr. Myers in 1981. Mr. Myers is now in its 40th year of performing in the Midwest, and also occasionally plays in Las Vegas, Florida and the Caribbean. Todd has written many original songs that are featured in several Mr. Myers recordings. He also has 2 solo projects, "Warm Weather Music", which is a  collection of calypso and folk songs geared towards children, and "Healing Steel Drums Volume 1", a beautiful recording of pure steel drums and surf sounds. Two singles, "Goin' To Paradise" and Modern Day Pirates" were released in June of 2015 and Todd's solo album "Tropical Existence" in 2017. Todd currently resides outside Chicago, IL and plays year round doing solo engagements and working with Mr. Myers.